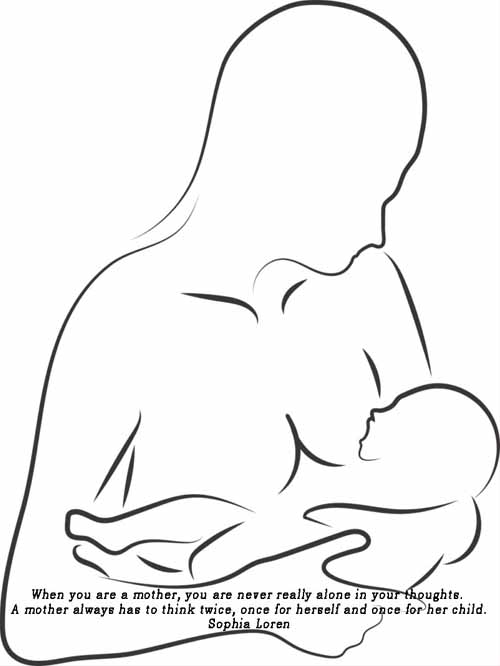 I want to say BRAVO to those who managed to breastfeed, for as long as that was. BRAVO and to those who didn’t or didn’t choose it, because all that matters is to be with your baby, give your love and affection generously, listen to his needs and satisfy them as much as you can.

When I became pregnant I had countless anxieties … the only thing I didn’t worry about was breastfeeding. I considered it an ” easy thing” and i was completely sure i would succeed because it was the natural path. No one around me had me prepared for what I’d come across and no other woman had shared her personal hard times. Do you know why? Now I understand … Because every difficulty is forgotten, when that magical moment comes, when mother and baby become one with breastfeeding. This warm energy flow and love transfusion makes you forget about the failed attempts of baby gripping the nipple, the frustration you feel when he is denying your breasts, the pains, the insomnia, etc. As it is said, no matter how hard is to give birth, when you get your baby in your arms every difficulty is forgotten as if by magic, that happens also to breastfeeding, when this delicate balance is found between mother and baby, so that they are both happy and satisfied, all difficulties are as if they had never been.

Lets take the story from the start, in the maternity hospital , my baby was born 38 weeks with cesarean section, I don’t know if that fact made a difference, (it probably did ..) but he didn’t seem to have appetite for the first 24 hours. I was so happy and tired of the surgery and I did not insist as much as I should.

MISTAKE # 1 baby needs to breastfeed as often as possible!! It is said every 2 -3 hours but even every 1 hour is better because it will “train” itself in mammalian movements to catch the nipple and milk will flow more easily. So after not eating well for the first 24 hours, next day jaundice came … my baby started to get yellow and was constantly sleepy.

MISTAKE 2 # Panic came! Worst consultant … Do I have enough milk? Is it ok for him? Why does not he eat? Should I give him formula milk? Milk will definitely come (unless there is a medical issue) in the third 24 hours. The only thing that needs to be done is with the help of an experienced midwife to breastfeed as often as possible!! But what if something goes wrong with milk production?

MISTAKE # 3: don’t wait!! Request a breast pump. It will increase milk production and your baby will be better fed so that jaundice will not increase, myconium will clean faster and weight will be gained. The third 24 hours there was overproduction of milk, massages and warm compresses were very much needed. Because our baby had high jaundice and had already lost 10% of his weight, he was getting near to hypoglycemia. So we had to take fast a decision whether to give him formula milk, my husband and I made a choice to continue breastfeeding.

In the fourth 24 hours with the use of a breast pump, our baby started to take a few grams and told us that we could take him home with the recommendation for frequent feeding and regular checkups by a pediatrician.We were instructed by the maternity hospital to give breast milk with a syringe rather than a bottle so that our baby would not have nipple confusion. I struggled and tried it with the warm support of my husband in the first days, but the result was not satisfactory so we ended up using a baby bottle. For the next 3 months i completely became one with the breast pump and sterilizer throughout the day and i continued trying (not always successfully) to breastfeed overnight. Slowly we managed to gain more and more weight. My husbund and i showed patience and even when we were frustrated and distressed, found refuge in each other and continued.

MISTAKE # 4 Dad, mom absolutely needs you to support her after giving birth, accepting the challenge of her new role, no matter how easy or difficult things are embrace your wife and boost her confidence to do it.

In our case, jaundice stopped much later, at the end of the third month, and then breastfeeding was finally established after many many failures. It was a blessed moment when he was fed directly by me and breast pump was no longer needed, neither continuous sterilization and baby bottles.  By then I had watched countless videos on Youtube about breastfeeding, read countless articles, and attended seminars but in reality (as I lived it) every mom finds her own way with her baby and then breastfeeding becomes magical!!

Feelings are overwhelming you, when you see your little creature satisfied and full of your milk and these cannot be described. There’s only one message I want to give DON’T GIVE UP! Ask for support and help and TRY it, it’s definitely worth your effort!! We breastfed for 15 whole months!!!

16 comments on “What i have learned during breastfeeding”